While lung cancer is the number one cancer killer in the country, it can have a 90 percent survival rate if caught early. 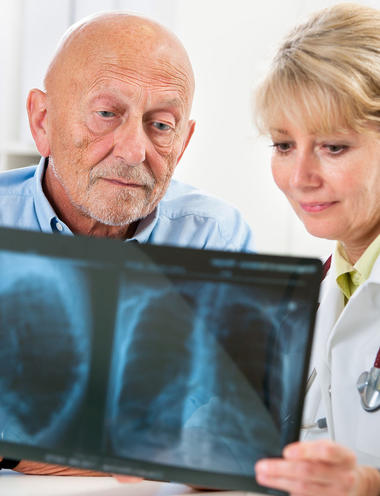 Who should be screened for lung cancer?

Take the eligibility quiz for a lung cancer screening from the American Lung Association.

What is lung cancer?

Lung cancer is a disease in which cancer cells grow in the lungs. Cancer occurs when cells in the body divide without control or order. If cells keep dividing uncontrollably, a mass of tissue forms. This is called a growth or tumor. The term cancer refers to malignant tumors. They can invade nearby tissue and spread to other parts of the body.

There are two types of lung cancers:

How is lung cancer diagnosed?

In its initial phase, lung cancer may cause no symptoms in patients. Symptoms that can occur beyond the initial phase include:

These symptoms can be associated with other lung problems so a person should visit their doctor for an evaluation.

During your initial visit your physician may evaluate the following:

The physician may also request that you have a chest x-ray and other test completed. If lung cancer is suspected, a biopsy of the tissue may need to be performed.

How is lung cancer treated?

Once lung cancer is found, staging tests are done to find out if the cancer has spread. Treatment options depend on each patient's unique case, but may include:

Surgery to remove the tumor, nearby tissue and/or lymph nodes. The type of surgery depends on the location of the tumor, such as:

Lobectomy — removal of an entire lobe of the lung

Pneumonectomy — removal of an entire lung

Radiation therapy to kill cancer cells, shrink tumors, and sometimes to relieve symptoms, such as shortness of breath. Radiation may be:

Chemotherapy drugs to kill cancer cells that have spread to other parts of the body. This may be given in many forms, including:

Sebastian River Medical Center physicians are utilizing Veran’s SPiN Thoracic Navigation System to assist in diagnosing lung cancer in its earliest stages by reaching lesions in the lungs that were, in the past, difficult to reach with traditional technology.  This new system will allow physicians to act sooner and not wait for lesions to grow before they are biopsied.

The SPiN system utilizes electromagnetic technology, like the GPS in your car, to accurately guide physicians to even the smallest lung nodule. The planning begins with a CT scan that creates a 3D roadmap of the airways within the patient’s lungs. The respiratory gating technology accommodates the constant movement within the lungs created by normal breathing. The physicians can use this roadmap before the procedure to customize their views and select the shortest, safest path to the targeted lesion.  They then use specialized instruments that communicate with the gated navigation system to collect a tissue sample. The SPiN technology allows physicians to customize bronchoscopy procedures for more accurate tissue sampling which provides their patients with an earlier and more precise diagnosis.